Please introduce yourself and tell us about your background.

My name is Joris Putteneers, I'm a 22 years old architecture student currently living in Ghent, Belgium. I grew up in Antwerp (Belgium) where I studied electro mechanics, but switched over to architecture when I was 17.

The reason I switched was that I always had a strong interest in the structural and the logical and I had the feeling I couldn't express those interests in my current study.

I can't say I was interested by architecture right from the start, it was more of a gradual process in which I learned to appreciate the craft more as time continued and experience was gained.

I began working in 3D software when I was around 15. I started off with a basic polygon modeller like Sketchup and ended up somehow using vex scripting in Houdini 7 years later.

At the moment my daily workflow primarily consists of three software packages.

SideFX houdini as my main software, used for everything algorithmic and computational. Autodesk Fusion360 for parametric surface modelling and 3ds max for polygon modelling and rendering.

It may not be your standard architecture software collection but it does the job for me perfectly. 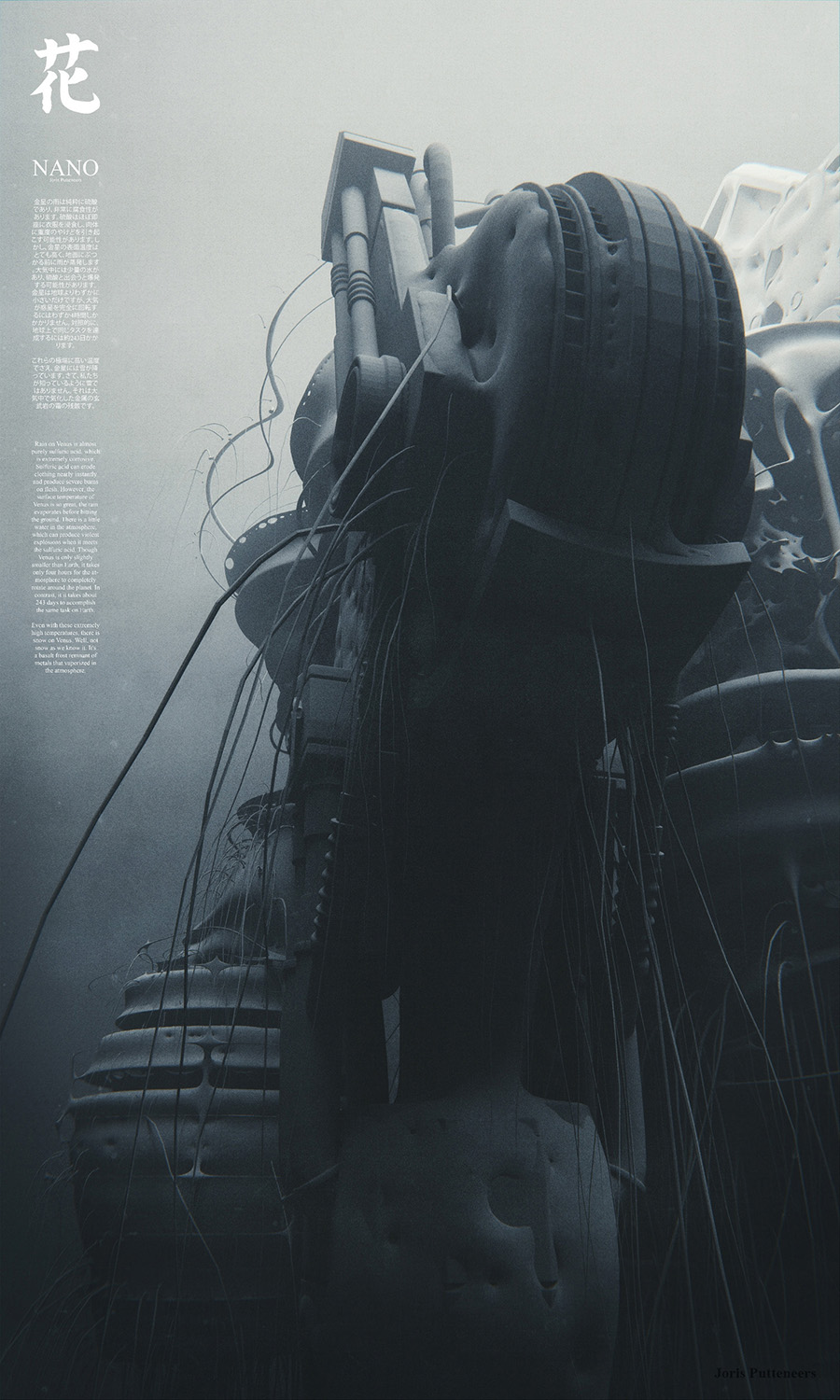 Your work has a heavy focus on algorithmic and procedural design, what sparked your interest in this medium of 3d design?

I always had a frustration with the way how 3D applications were being used in the field of architecture.

Most people use 3d software as an extension of analog drawing without using the computational powers that computers are capable of.

You draw lines to complete the desired shape. whether it is analog or digital, it is the same principle.

So in that aspect the process of learning how to program and write algorithms was more of a reaction to the way current 3D applications are being used. This was also the reason why I chose to learn SideFX  Houdini a couple years ago as it is, in my opinion, the most flexible program on the market which gives you ultimate freedom and flexibility if used correctly.

Can you walk us through a few of your favorite projects and tell us a bit more about your creative and technical process?

It is hard to pick a favorite one as I see most projects as a continuation of each other. What is the same for every project though is the very iterative design process. I brainstorm about a specific problem or goal and make a few tests. I do this digitally in Houdini and I make some quick small drawings of how it potentially may or should look like once it’s finished. The first few tests and ideas are almost  always rubbish and most of the time I throw them away, rethink and start over. It is a process that can go on many times before achieving a result that I’m happy with. The good thing about working with Houdini is the fully procedural workflow. This means that, once you create something useful, you never lose the ability to alter it. You don’t have to start all over again from scratch but can you  build upon previous setups quickly. 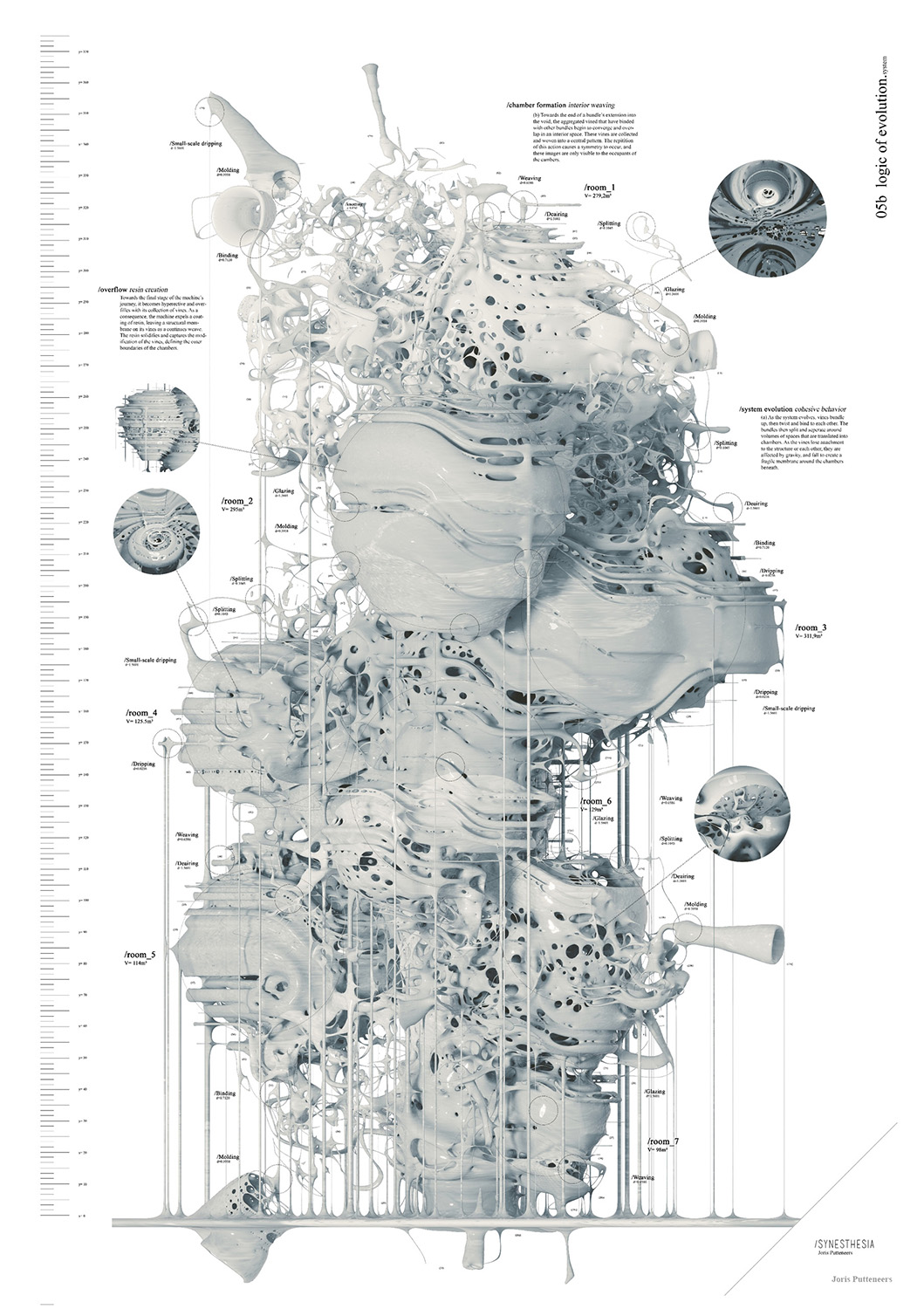 Can you provide some stats on your projects?

For example, in “Skizoid”, my most recent project, I managed to get around 60gig production data,

Do you have any favorite techniques or algorithms that you use more often?

- surface area(m²) and volume(m³) room_01;
- amount of rooms/functions;
- surface perforation(%) depending on the total surface area, this is handy for calculation light values;
- the connectivity and interactivity between certain rooms;
- the (optimal) organization of different circulation patterns;
- optimal circulation between certain rooms;
- the relation between private-public, closed-open,..

2)These input values get translated into voxels (the 3d representation of a pixel) inside a volume as attributes. This is really handy as you can store multiple attributes and so a multitude of information inside a single voxel.

3) Then I can translate these values into vectors as they create the base of the different spaces, the connectivity, the circulation etc.

There is a clear hierarchical order to the process as the attributes intervene with each other creating a complex vector based structure.

4) Now, the structure goes through a process which checks and recalculates misread attributes.

5) Now we have the vector representative of the algorithm, the next step is to grant a certain mass to it.

I achieve this by treating the vectors as a growing organism which excretes a resin with a variable viscosity value out of calculated stress points. This resin hardens after x hypothetical years which makes the structure permanent.

This whole process is far from perfect and still has a lot of flaws. It is for example easy for certain values to be misinterpreted, misread and miscalculated which results in a multitude of different artefacts and feedback loops.

Personally I don’t mind these errors as they give the structure their aesthetic characteristics, but eventually i will try to eliminate them, as the algorithm evolves.

After the process is completed, the structure is exported and rendered into Autodesk 3ds max with Fstorm render, Arnold Renderer or V-Ray, depending on speed, quality and flexibility needed for the project.

Is the algorithm the final step? is this a work in progress? what are your next steps?

My next step would be to optimize the current algorithm, to implement some sort of very basic awareness so it can be used in projects when context is required.

What I also like to do in the future, is to partially 3D print a portion of a current structure, at scale 1/1 so I can truly understand some of the intricacies of the surface functions at micro level, something you aren’t able to do when you work purely digital.

Your work is very reminiscent of work I’ve seen from the Bartlett, you mentioned they are an inspiration?

Yes they are indeed an inspiration, It really fascinates me how the school focuses most on their energy on experimentation, research, exploration and fabrication while combining these with the architectural fundamentals.

What perhaps inspires me the most is their freedom to create and to explore all fields of architecture without being compromised by the professor’s vision of what architecture should be.

It is in big contrast with my current university where most of my professors are traditionally trained and are heavily focussed on the challenges of commercial building projects. Although professors with an interest and knowledge of computational design and fabrication are present, it is in very small amount. 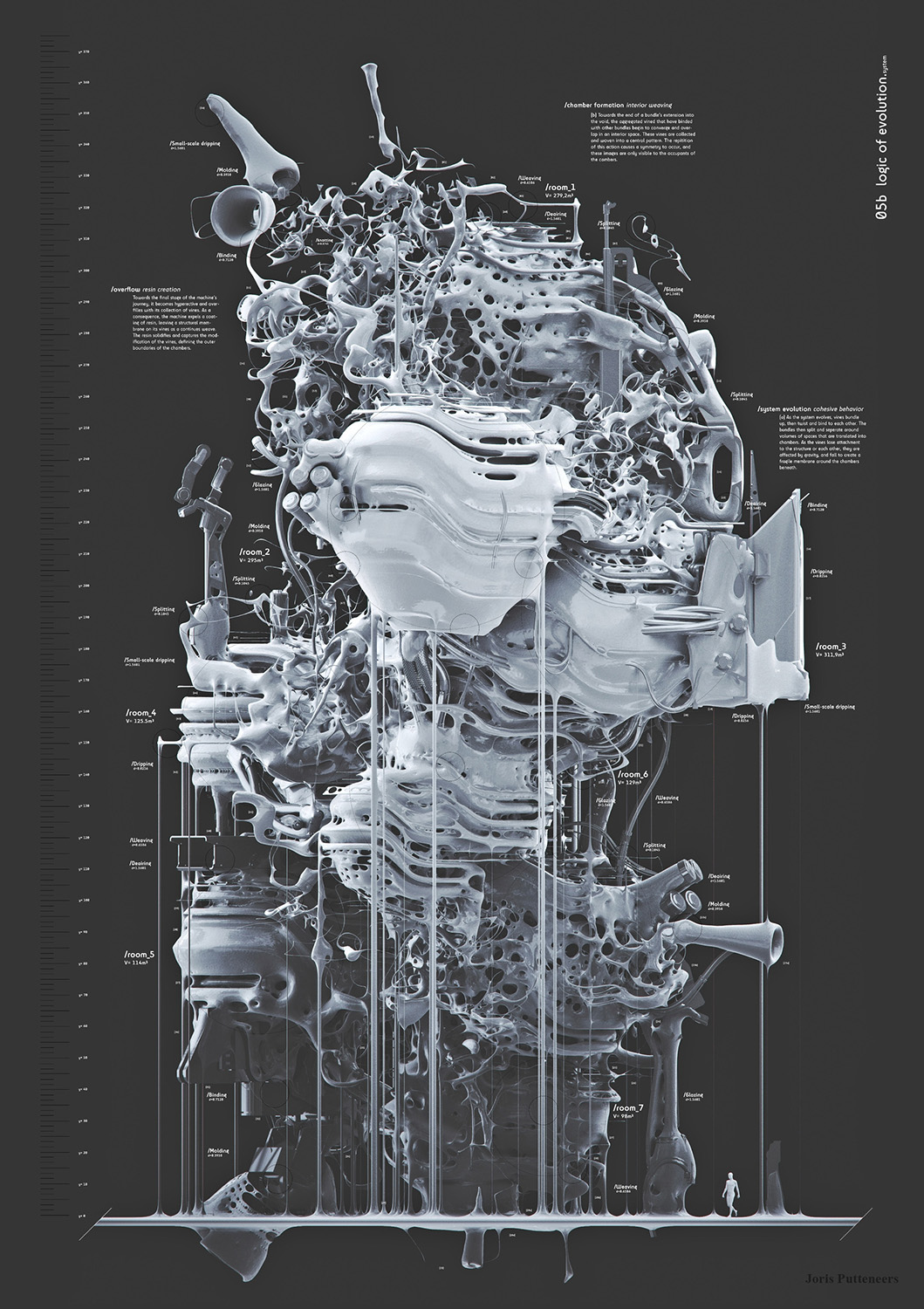 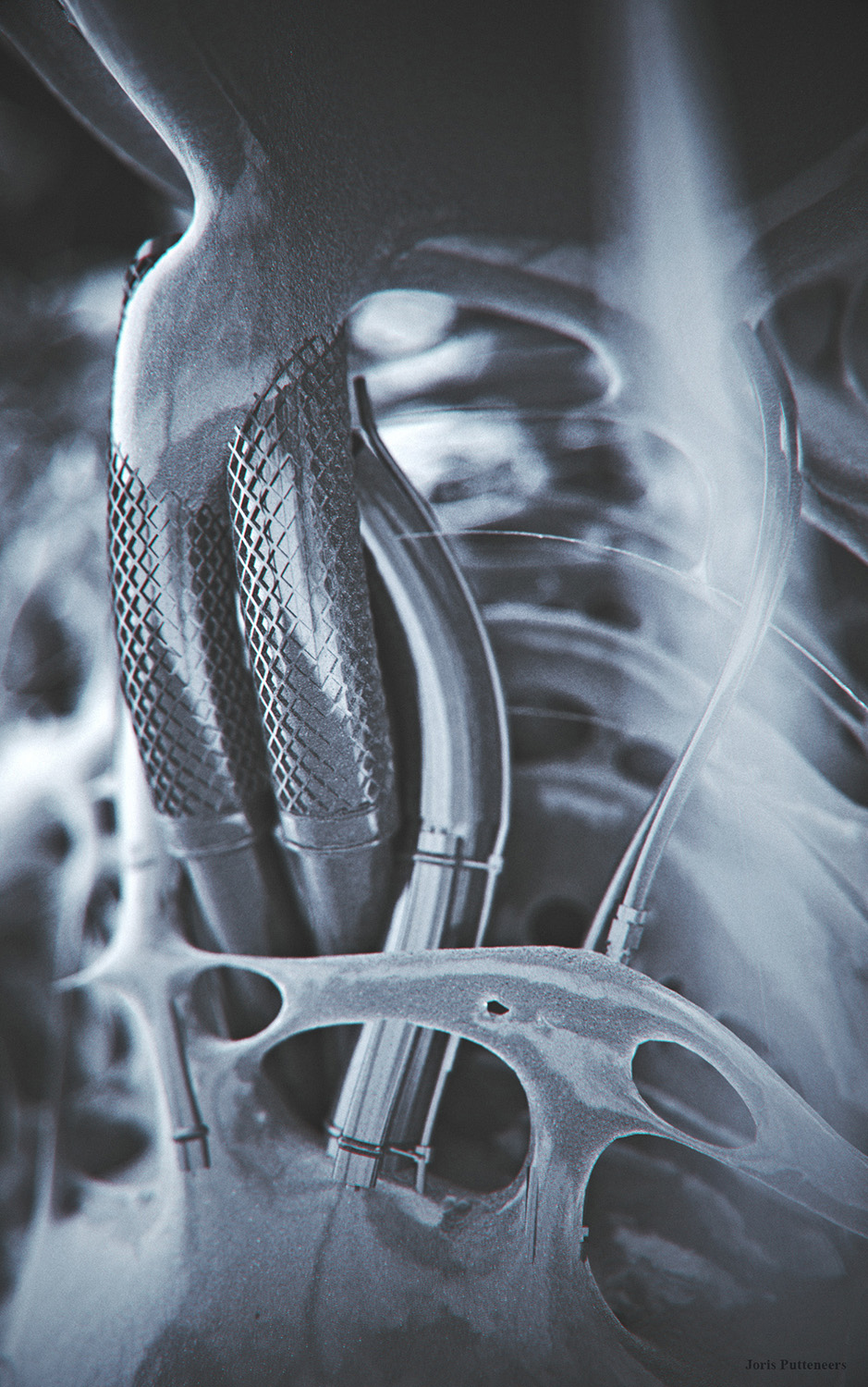 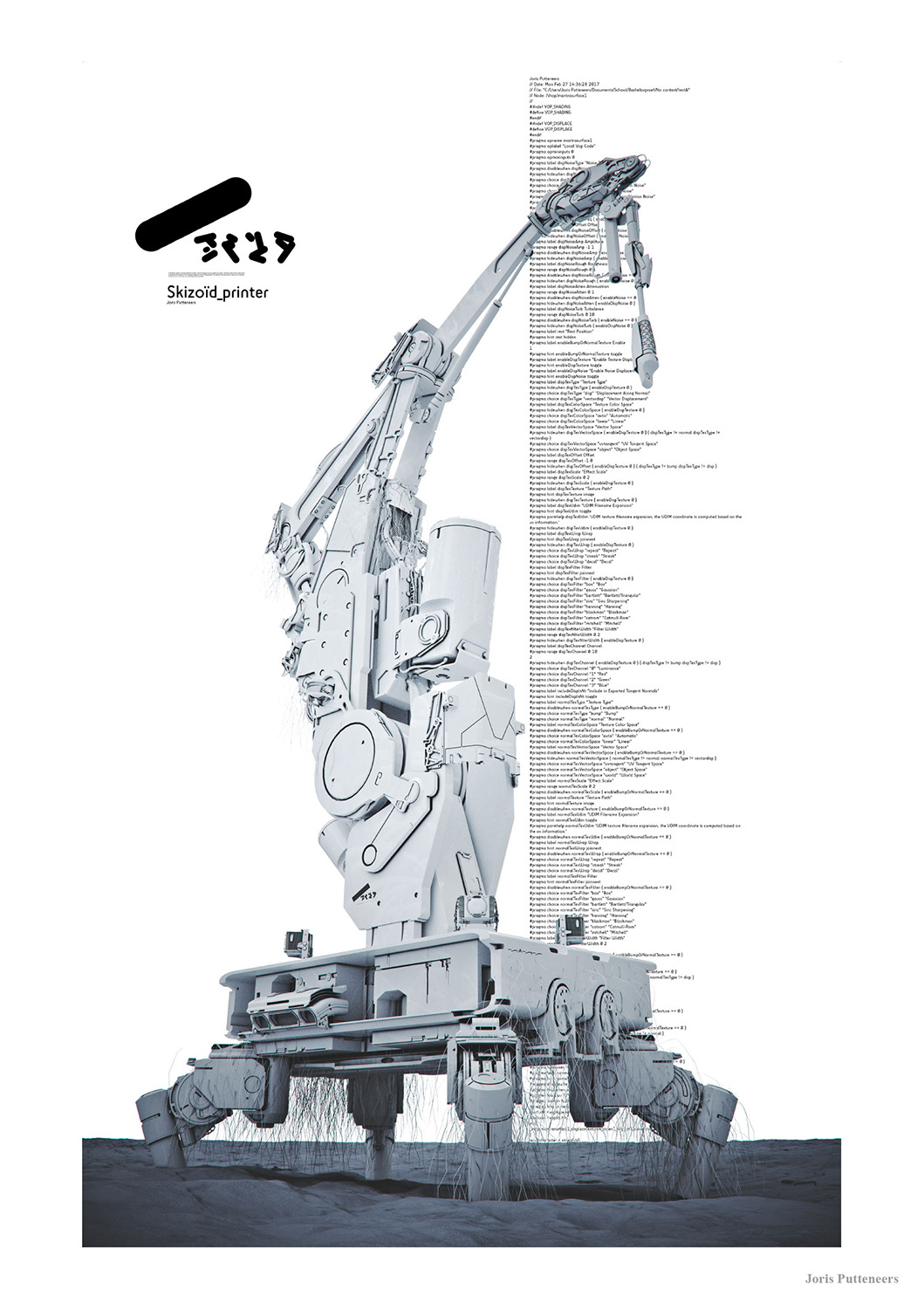 What are you trying to depict in your architecture?

I aim to depict an architecture without classification. I try to explore new levels of resolution and topological complexity, purely based upon a hybrid relationship between an algorithmic process and subjective interruptions.

I try to achieve a delicate balance between control and relinquishment, between chaos and order, both natural and artificial.

The algorithms I create, are deterministic as they do not incorporate random values, but the results are not entirely foreseeable either. Using this method, the resulting architecture can devise surprising topographies and topologies that go beyond what one could have traditionally conceived.

You say, you use algorithms as a medium of creating architecture, are architects still necessary according to your logic?

When, in an unlikely future, the profession demands such algorithmic methods, I still think architects will be a very important part of the process. They still have a profound understanding of, light, composition, color, materiality, scale... These are parameters, which I think, can never be calculated by an algorithm as they are truly subjective and context dependent. These parameters can’t be expressed by a series of numbers, even if the algorithm is optimized to handle those parameters.

And in situations where the algorithm is practiced on a much larger scale, the size of a city for example, the architect will always be the overseer as the algorithm lacks the knowledge about the complexities of urban planning and human relations. 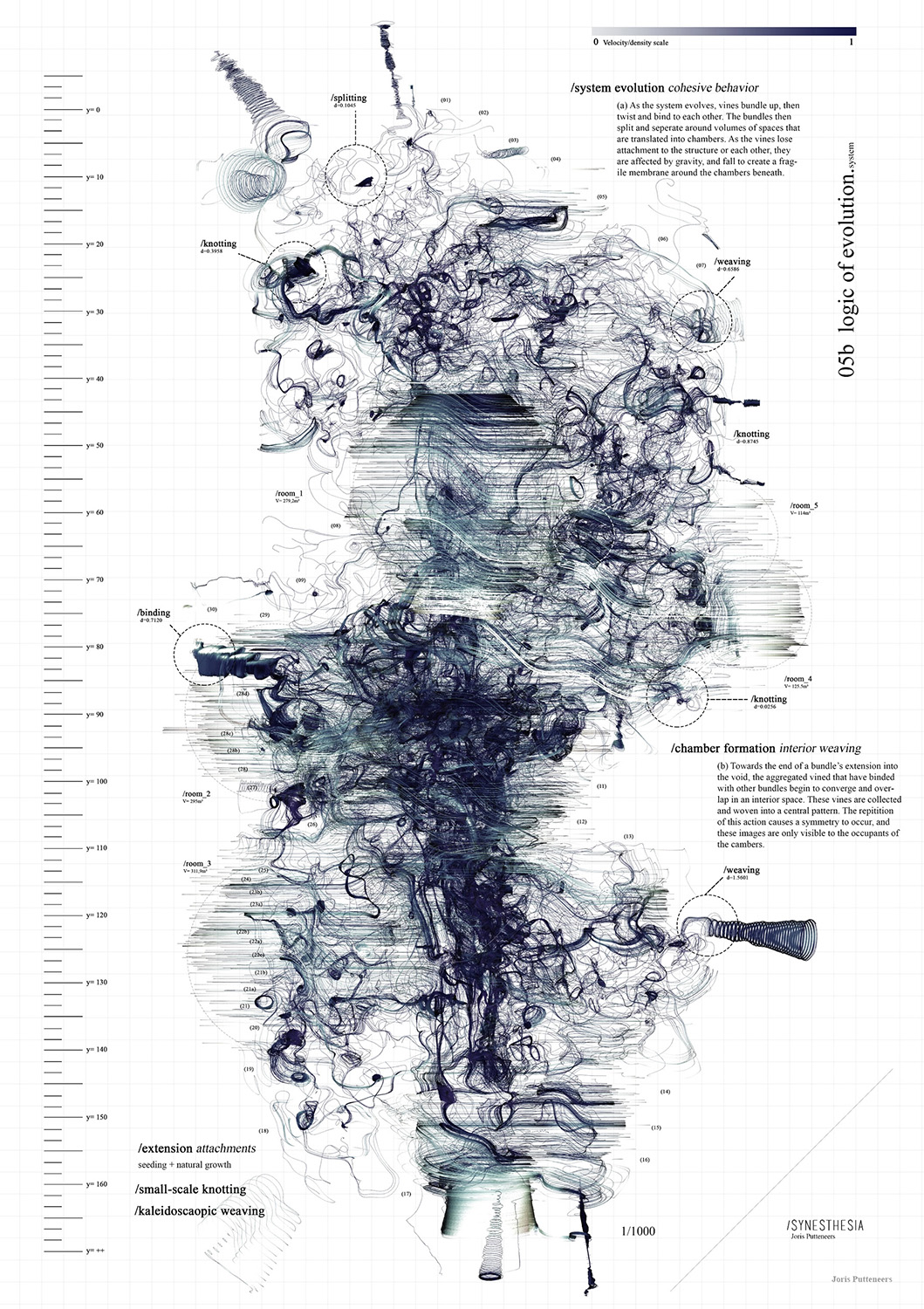 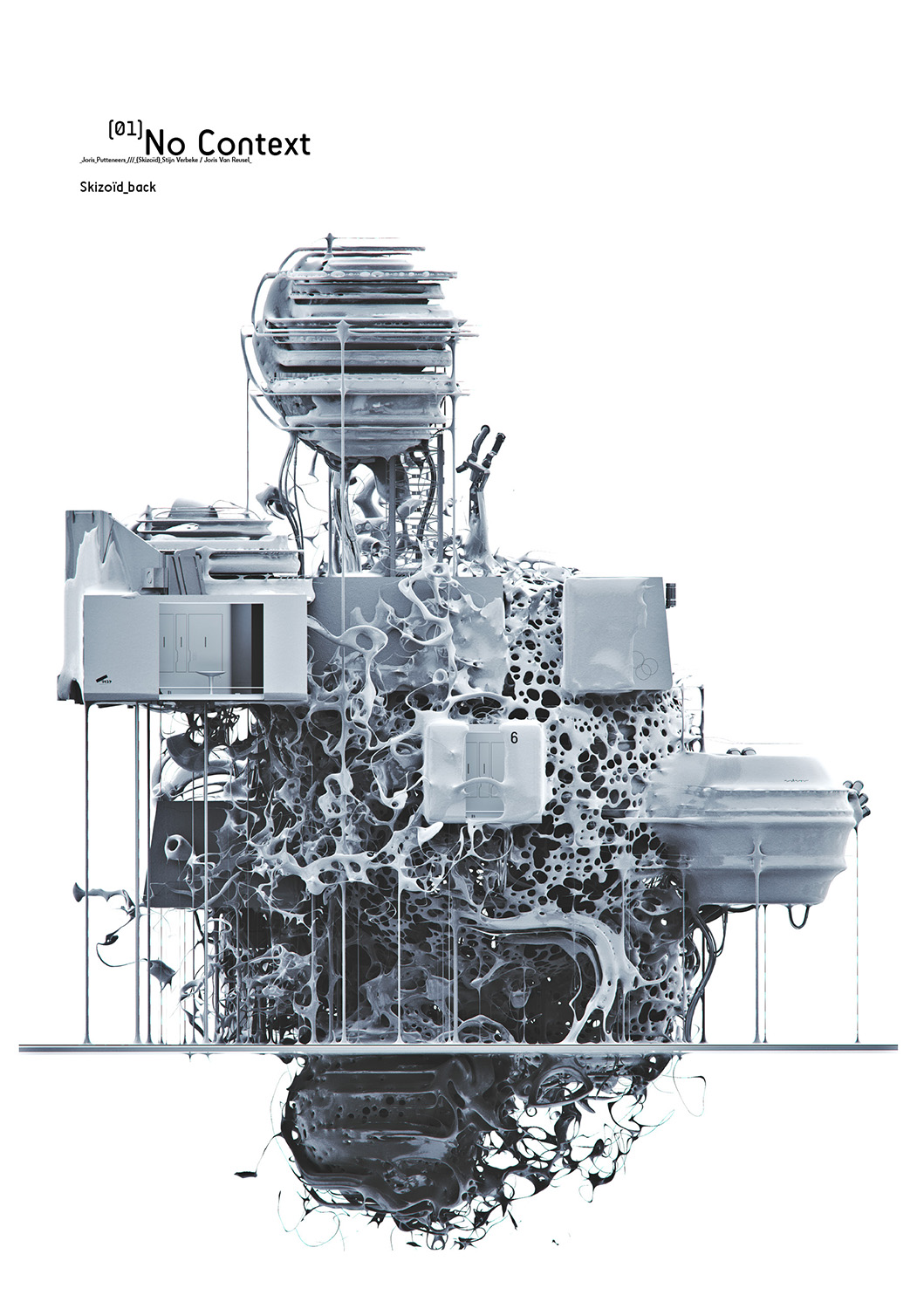 You are still in school, what are your plans after you graduate?  A career in architecture or visualization?

That is a question I receive a lot actually, and frankly, I don't have a definitive answer to that. Although I will graduate as an architect, I don’t think I will invest my time in building commercial projects.

I wish to focus more on the theoretical aspects of architecture which will hopefully include lots of research and digital fabrication.

I try to include lots of creative fields in my daily workflow as I believe it is the best way to keep your brain sharp and focussed and I hope to continue this path in the future.

What project are you working on now?

Currently I'm working on a couple of projects, one is an extension of “Synesthesia”, where I made some attempts implementing an algorithm which calculates the optimal route for electrical wiring and drainage systems throughout the structure.

Of course this is highly speculative as it doesn't include materiality and structural integrity but nonetheless, I really enjoy thinking  about such ideas. I also believe  that experimenting with these elements will be useful in the long run when the algorithm becomes more practical some day.

Another project I'm working on uses the implementation of context. This is where the algorithm uses and interacts with a given context as a new set of parameters. This is in a very early stage but I do hope to have the first prototype in the course of the next two months.

What would be your dream project?

My dream project would conclude a series of projects, covering different mediums and concepts as separate pieces of a larger interest, joined by passionated people with a willingness and drive to experiment. 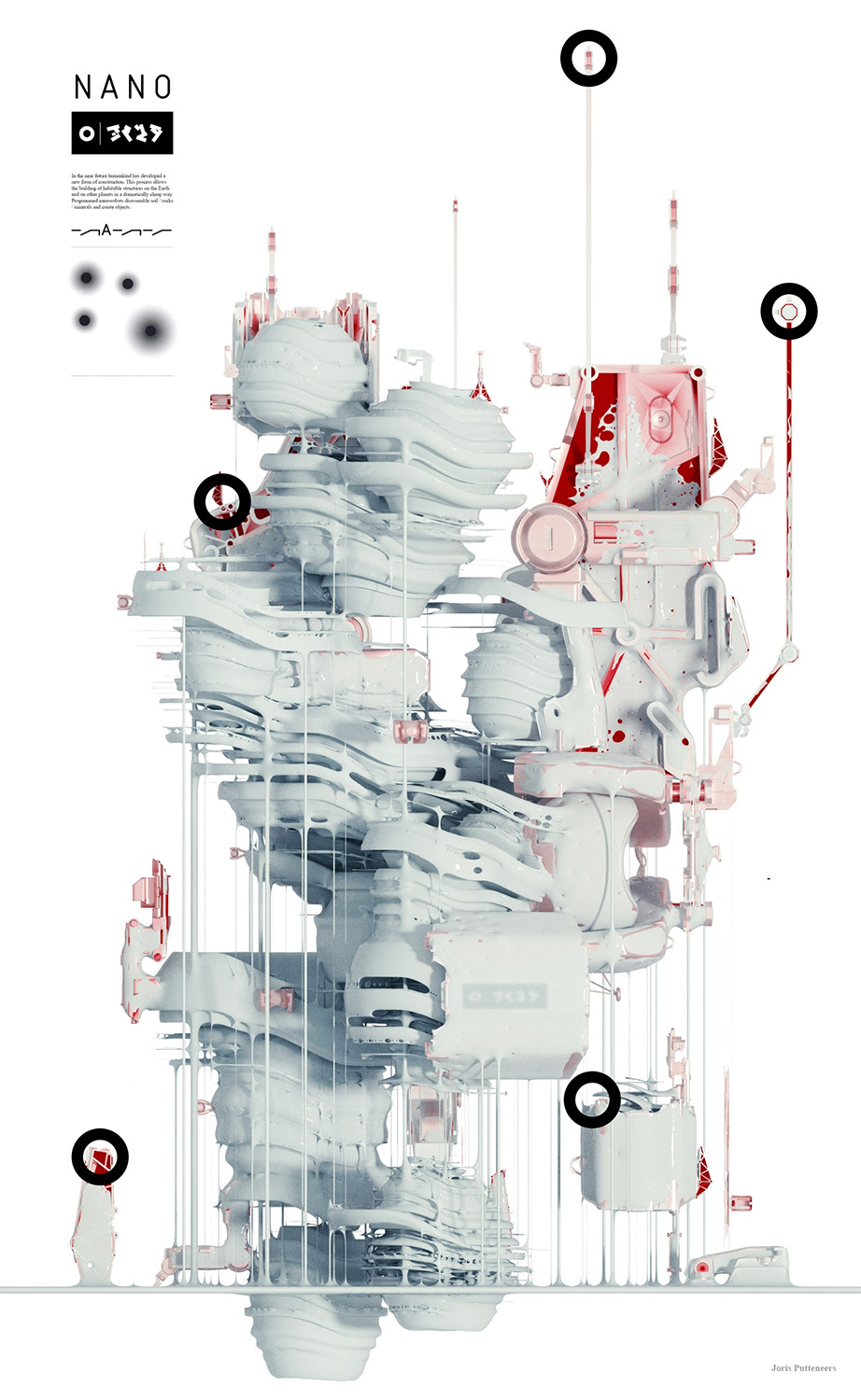 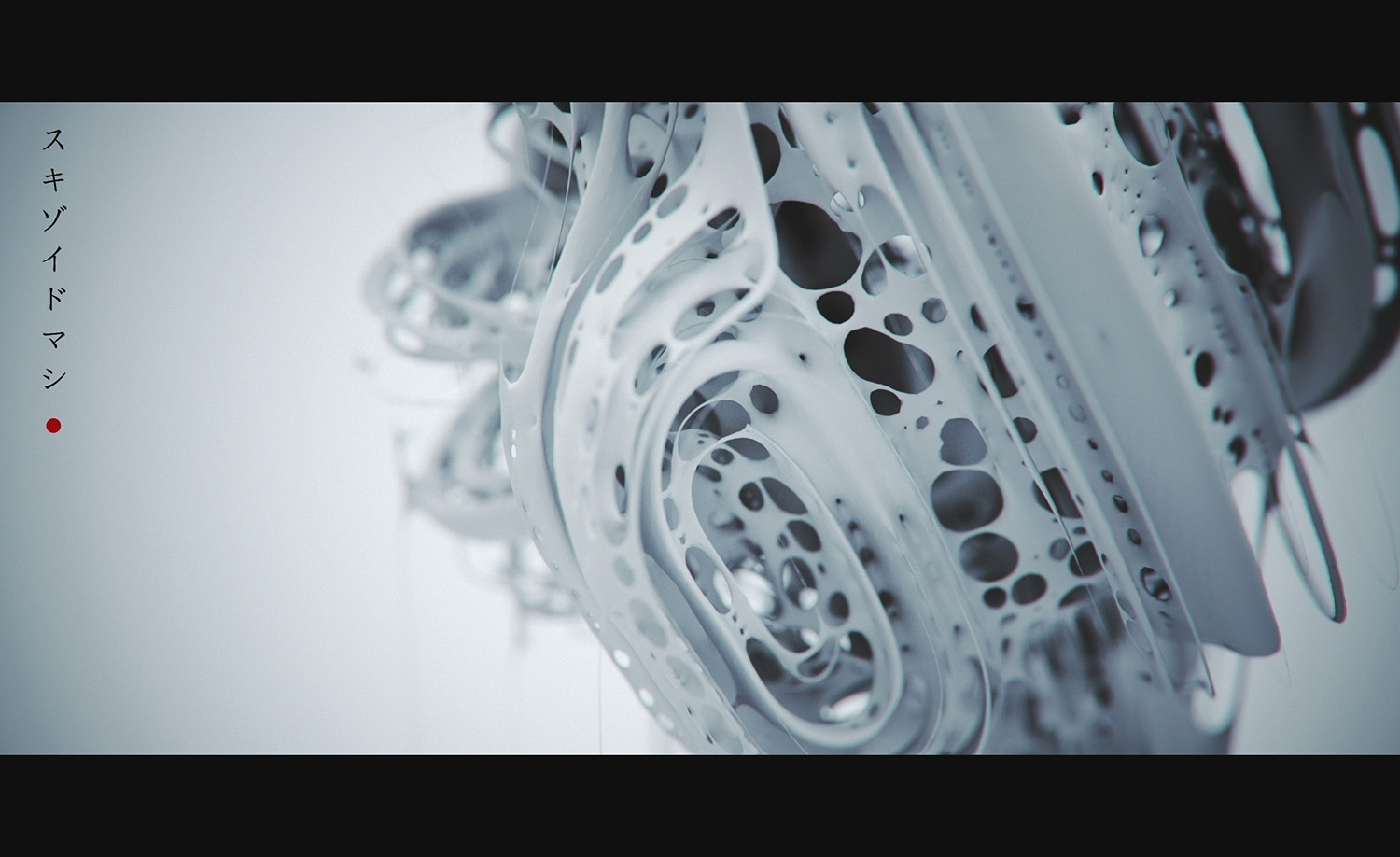 What non-digital artists or works of art inspire you the most?

I would say that I'm most inspired by texts and manifestos I read. This can include a lot of different topics, from philosophy, to mathematics, to biology, to architecture.

At the moment for example, I'm really interested by William Bateson, a teratologist who was fascinated by deformities, mutations and abnormalities of the human body and how this was visible in their genetic code.

I always search for ways I can relate my ideology to the topics I'm reading. I don't have a television on purpose so I try to read at least a couple of pages before going to bed which, I like to think, helps boost my creativity and knowledge.

I also have a really big appreciation for the great painters Goya, Rembrandt, Cézanne, Monet... for their control over composition, light and color.

Also some of my all time non-digital favorites include Lebbeus Woods, Francis Bacon, Nietzsche and Hansruedi Giger. Each for their own specific reasons.