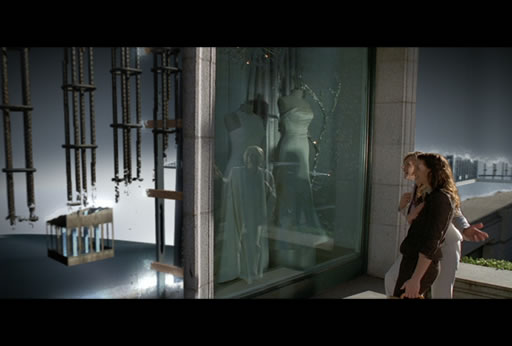 A new three-spot branding campaign for Dell is shedding new light on the company and its far-reaching influence on industry, technology, and society. Directors Tim and Jeff Cronenweth of Untitled (www.untitled.tv) worked with agency DDB /Chicago to create “High Finance,” “Pure Productivity,” and “Customer First.” While each spot offers a distinct perspective, the campaign centers around the interface between Dell’s unique, direct approach, its business customers, and the world they are building together. 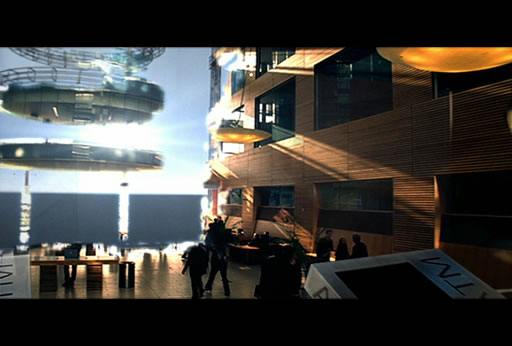 In the world of “High Finance,” a new day is always dawning. In one seamless camera move, the Cronenweths take us from a New York banking floor, to board meetings upstairs, across the world to an evening in Paris, and finally to an early morning stop at an ATM in Hong Kong. 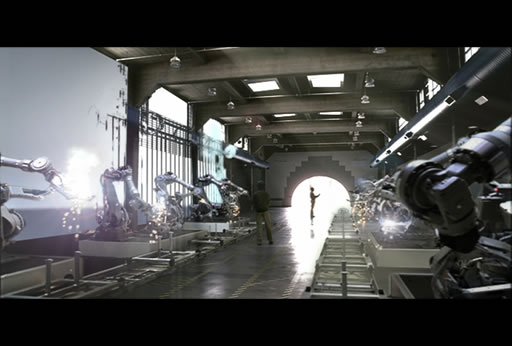 “Pure Productivity” begins with an idea, but the sense of accomplishment comes from seeing that idea through to completion. This spot imagines a manufacturing operation where technicians and technology work together to create a new product. Set in the near future, the ad features robotic arms that assemble a line of motorcycles, bringing to life the vision of designers seated nearby.

“Customer First” conveys the growth of a business, in this case a bridal shop, literally from the ground up. What starts out as a storefront mom and pop business grows into a big business, and as such we see the building being expanded to allow for increased production and superior customer service. Dell allows the small business owner to expand, keeping an eye on the store instead of the server.

“This was a unique opportunity to be a part building their brand for business customers” said Tim Cronenweth. Each spot opens with a crisp, pleasing shot of the Dell server in a pure environment. The Cronenweths wanted to set the server racks and hardware systems in an environment reinforcing the notion of “ a new, different approach with Dell .” Thus, the components were set on a metallic floor, the same color as the Dell power button. Throughout the campaign, seamless camera moves are employed to tell us stories of impressive growth and productivity.

“Although 85% of Dell’s business is with Fortune 500 companies, it’s been a number of years since Dell advertised in that business to business space, and they were looking for a new way to break out,” said DDB/Chicago ACD/AD Mark Westman. The answer was the business model called “Pure Dell,” wherein the company works directly with business customers not only to customize their products, but also to create a customer experience that is more informed and responsive. “The Cronenweths really embraced the idea and were head and shoulders above other directors in terms of their thought and understanding of how to create a seamless thread for this campaign,” Westman pointed out. “I can’t say enough about Untitled and the Cronenweths in terms of their planning and execution, and the seamless journey of these spots.”

“We introduced something we termed ‘Digital Fractal Construction,’”Tim Cronenweth explained, referring to irregular or fragmented geometric shapes that can be repeatedly subdivided into parts, each of which is a smaller copy of the whole. “Our goal was to recreate the interface between humanity and technology, taking a naturally occurring thing like fractals and melding them into a technical environment, Dell and man working together.” “High Finance” called for the design of a banking floor on street level, and from that point the viewer is brought higher and higher, eventually reaching a huge office with a view of the evolving city, citing the impact that the company’s growth has had on the city around it, and on the world. 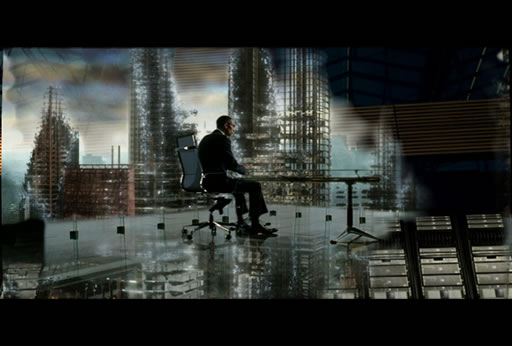 For example, we see the sun setting, and it blooms the lens; when that light dissipates, we realize that it is 4:30pm in New York, 10:30pm in Paris, and sunrise in Hong Kong. “We envisioned a long tentacle of this high-finance corporation, suggesting a palpable global connectivity,” Jeff Cronenweth explained. “Essentially, our camera is moving up the building, across the world, then back around to Dell.” 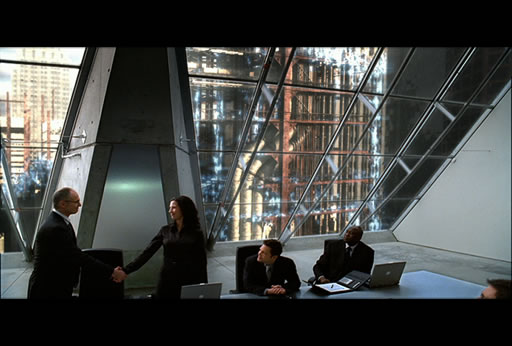 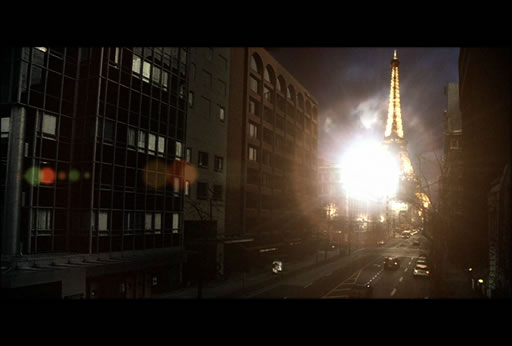 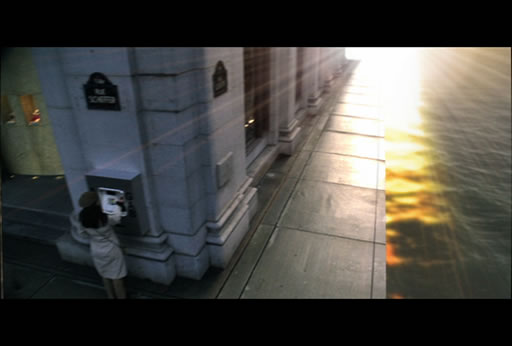 DDB loved the idea, but was admittedly a bit cautious about accepting the notion of single camera moves and no visible edits. “We understood, because this is a house of cards, there’s no ability to cheat,” concedes Cronenweth. “But we felt this would create a stronger impression on viewers, and everyone embraced that.” The directors created three seamless ads without a single edit, and with the high quality of execution for which they are known.

VFX Supervisor Ash Beck of Nerve Films brought a progressive, Dali-esque quality to the effects work on all three spots. “It was very important to Jeff and Tim for the campaign to appear set five or six years into the future,” he said. “The server is the center of the spot, and everything emanates from that object, which serves as the perfect bookend for the spots.” Beck pointed out that this was an extremely ambitious project, especially given the timeline. “The only way we were able to accomplish it was to previs on set, designing the 3d work simultaneously, with my CG Supervisor Rusty Ippolito working from LA while we were on location in Vancouver.” There is motion control in almost every shot of the campaign, and the directors storyboarded almost all the transitions. Beck said that tight organization allowed the team room for ideas and collaboration. “No ideas were compromised,” he said. “ Not many people get to do a spot like this,” Beck said, “and for Nerve the beauty of this campaign is that at no point do you lose sight of the message – the effects are not overwhelming.” 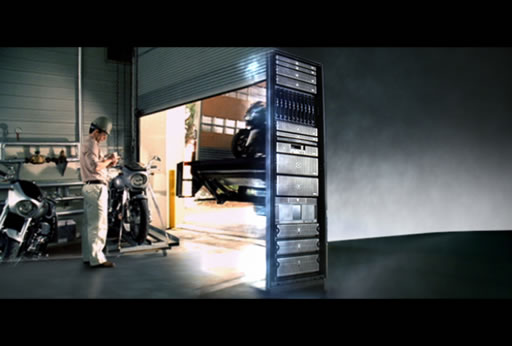 Tim Cronenweth said that by the time he and his brother began shooting, “the agency, client, directors, and digital team all came to a unified collective approach.” This was key, in order to convey the new face of Dell. “Dell is a part of the technological revolution and touches boundaries far greater than what they’ve been recognized for,” he observed. “This company is totally integrated into society at the highest levels, and hopefully that comes through in the campaign.”

And in the end:

“Untitled and the Cronenweths refused to compromise the production regardless of the challenge,” Westman said. “No one walked away saying I wish we had just one more shot.”

“Digital Fractal Construction may sound technical, but ultimately it’s the spirit of this idea that brought everyone associated with this campaign together,” said Cronenweth.

A new three-spot branding campaign for Dell is shedding new light on the company and its far-reaching influence on industry, technology, and society. Directors Tim and Jeff Cronenweth of Untitled (www.untitled.tv) worked with agency DDB /Chicago to create “High Finance,” “Pure Productivity,” and “Customer First.”