The project is located in the La Perla Shopping Center District, in the City of Zapopan, Jalisco, Mexico. It is an exercise in urban integration that combines modernity through architecture and tradition in the activities of the community in Jalisco.

The facade converges at a vertex that forms the union of two avenues, it is formed by a grid of triangular modules with flat pieces and in low relief, forming a subtracted pyramid, which when rotated allows multiple variables, and when combined it manages to transmit the sensation of movement. The texture rotates along the walls of the façade, which points to and accentuates the main access to the store. In addition to the set of reliefs, the same geometry has been transferred to the openings through windows that frame the exterior urban context and allow natural lighting inside.

The intention of this facade is that as the day passes, the solar illumination generates games of shadows and reflections. Therefore, the facade always looks different, even at night, thanks to the lighting design. It is important to point out that the scale of the project was decisive for the modulation, the composition responds to the large canvas of the envelope, without losing sight of the user, it is interesting to observe in an open view how the human figure is embraced by the games of lines and their own shadows.

The facade construction is made from prefabricated white concrete on metal frames, the material allows minimal maintenance, and being a designed piece allows the least number of adjustments in placement. 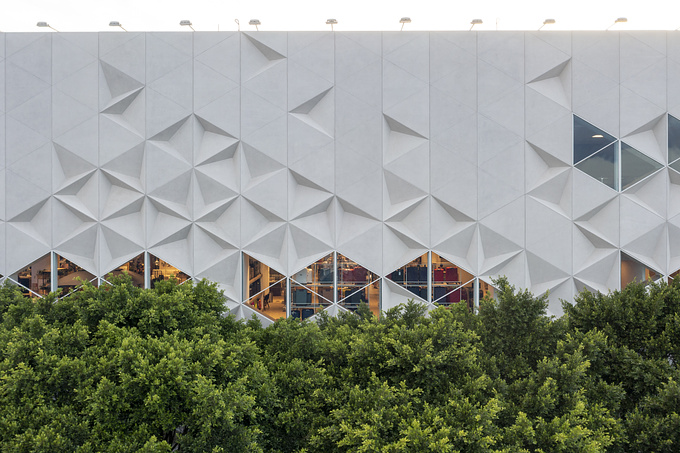